In Dreama Vance’s recent article, Nodal Points and The Train Station, she illustrated the concept of different parallel realities – of how different trains are leaving the station and how we can choose which “train” we will take as we progress through The Shift into tomorrow’s world. 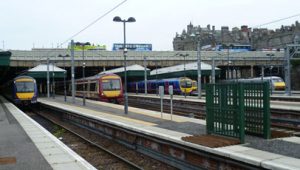 As we shall see, the idea of choices for alternate versions of our future explains the great mystery that was introduced in the early 1980s in the book, Mass Dreams of the Future.

It details the results of a research project that was undertaken where hundreds of seminar attendees were progressed into the future to see what their lives would be like in the time period 2100 – 2500 AD. Author Chet Snow summarized the results of this research project, which had been conducted by himself and past lives expert Helen Wambach.

Of those subjects reporting that they are to be physically incarnate in those future time zones, they found that the information correlated remarkably well into certain categories. These showed common themes in the different living environments viewed in those future incarnations:

1. New Age-types who lived an ecological lifestyle in harmony with the Earth.

2. In-space dwellers and people who lived on other planets.

3. A world of dome-covered cities. In sharp contrast to the green earth of the first category, this was a world where people lived under domes that offered protection against an unbreathable outside atmosphere.

4. Isolated cases of survivors living in the rubble of once-great cities. 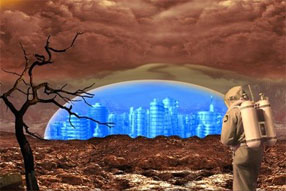 In the 2100 AD era, any expeditions outside the dome-covered cities required breathing apparatus for survival. Author Chet Snow was deeply puzzled by the contrast in environments. It was, as he stated, as though the dome cities were on an entirely different planet. The dome city people of 2100 AD weren’t living on the pre-Shift, third-density Earth that we know because that showed up (in category 4) as a largely-abandoned relic of today’s world, but with a breathable atmosphere.

Well after the 2100 AD era, however, the dome planet atmosphere was seen to have become cleaned up sufficiently for humans to venture out and make rural life possible. They were then able to farm the land, initially in a low-tech way similar to the 1800s on Earth and later with the help of machines. At that point, the dome cities were still in use by people who preferred the controlled-climate cities rather than living out in the country with its seasons and weather variations.

Stark differences were observed between conditions in the New Age eco-heaven on Earth and the domed communities on the other world; not only in the atmosphere, but in the level of crime.

The New Agers on Earth co-existed in a heart-centered reality with hardly a ripple of conflict between anyone. Some dome dwellers, on the other hand, reported lives that ended as murder victims or by being executed for having committed serious crimes against others. From this, it is safe to conclude that the world of dome-covered cities will be populated by people who did not wish to make the shift to heart-consciousness on Earth.

So, people were reporting very different futures for the same time period – futures of enlightened harmony on the one hand and the opposite on the other hand.

If you consider that parallel realities exist, each containing very different circumstances, then the stark difference can be understood.

It is also safe to say that the “isolated cases of survivors living in the rubble of once-great cities” is not an enlightened kind of parallel reality.

The key to where a person ends up in 2100 AD must be the focus of their consciousness. Do they wish to transform into higher consciousness and go with the Earth into a higher level of reality, or do they want to stay with the same old ways of base emotionality and perpetual conflict?

We know that our thoughts create our reality, even if the immediate effects are not vividly noticeable. Not only do our thoughts and emotions create our own reality, they also influence and manifest in the outer world.

In the longer term, with The Shift causing a dividing of the ways, the research in Mass Dreams of the Future illustrates that those alternate realities can be very different indeed.

2 thoughts on “Mass Dreams of the Future”