“The universe only exists when you are observing it,” or so the popular theory goes.

This theory is an offspring of quantum physics. It says that, because the observer affects the outcome of experiments, the observer is key to reality. The theory goes on to suggest that the universe only exists when you look at it; therefore you must be creating the universe from your consciousness. 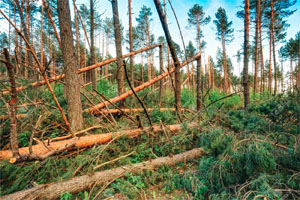 This is actually not a new idea. The old Zen riddle, “If a tree falls in a forest with no one to hear it, then does it make a sound?” reflects the same style of thinking. It suggests that nothing happens in the universe without an observer being present.

There is some validity to this theory in that, at the deepest level of consciousness, you are Infinite Being. At that deepest level, you are that which creates the entire universe, and that which maintains it in motion. However, at the everyday, human level of consciousness, the universe exists and runs quite happily without human intervention, whether or not anyone is watching it. The tree makes a noise when it falls, whether or not any human observers are present at the time. 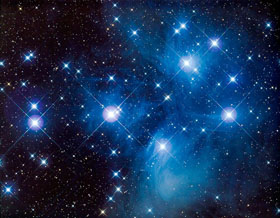 If you were creating the universe by virtue of being its observer, as the theory goes, then you would actually witness the Seven Sisters in their current position, and not in the position that they were five hundred years ago.

Physical objects have their own specific locations in space. Space, however, is just a projected illusion, a concept manufactured by consciousness so that the All may be divided into an infinite variety of apparently separate parts.

Time is also a projection of consciousness. Time is a concept whereby the infinite parts of the All can engage in the appearance of movement. The underlying reality is still the eternal Now and yet time makes change, and therefore an infinite variety of experiences, possible.

An everyday analogy of projected reality is a movie projected onto a screen. You know that the movie is just the projection of a recorded, dramatic scene, but it’s easy to forget that as you become involved in the unfolding drama. The movie appears like a real-life drama for as long as it absorbs your attention.

Time and space were fabricated within the consciousness of the universe in order to set the stage for life as we know it. Because the universe is made of 100% consciousness, all things are within it, and therefore subjective. Nothing is really “out there,” even though life appears to be an objective experience. All physical reality is a projection within your consciousness, not something outside of, or separate from, yourself.

Each and every object in the universe – a table, a chair, a car, a house, anything – is not only composed of 100% consciousness, it actually IS conscious in its own way!

*Owen Waters is the author of Freedom of the Spirit: Four Powerful Steps to Spiritual Freedom.