In 1963, at the ripe old age of 13, I found myself floating in the air, just below the ceiling, looking down on my body. Today, we are used to hearing about near-death or out-of-body experiences but, back then, nobody knew anything… and it was just plain terrifying!

Some people report out-of-body experiences after a horrendous car wreck, a heart attack or some other life-threatening emergency. In my case, I was just being happy! 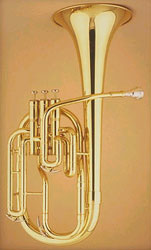 Really, I was playing music on my alto horn in a brass band. I was sitting, reading the sheet music on a stand in front of me and there was this long, low note that I had to play. In fact, it seemed extra long… like time had slowed down… and then it started to sound strange, like there was another noise in my ears.

Suddenly, my consciousness rose up out of the top of my head, continued on up to the ceiling and I found myself looking down on the sheet music stand.

My first thought from my new position above the stand was, “Now I can’t read the next note.” Then, realization about my situation struck home with sudden horror!

I sprang back into my body almost instantly and sat there, dazed and amazed. My out-of-body trip was one big wake-up call and it began my lifelong quest for answers to spiritual mysteries.

Back in 1963, metaphysical topics were rarely discussed, so it was just not appropriate to stand up in a room full of two dozen band members and yell, “I have arisen… all the way out of my body!”

Nurse Ratched in
“One Flew Over The Cuckoo’s Nest”

They might have called for men in white coats to come and take me away to the tender mercies of some Nurse Ratched look-alike!

Other spiritual experiences have followed my early out-of-body trip, but none quite as attention-getting as the distinct impression that I’d just died!

That was one big wake-up call and it began my lifelong quest for answers to spiritual mysteries.

Flash forward to 2014: It’s OK to talk about such things now. Even medical doctors are writing about out-of-body and afterlife experiences. The world has changed.

Metaphysical understanding today is light years ahead of where it was in my early years and I am so glad to have been a part of that movement toward better spiritual understanding.