Visionary art expresses inspirational connections with the spiritual and the non-physical. Prior to the Renaissance, the great artists were primarily employed by the Church to create paintings of the baby Jesus.

Notice the mandatory halos and winged angels in this example of the visionary art of the day. 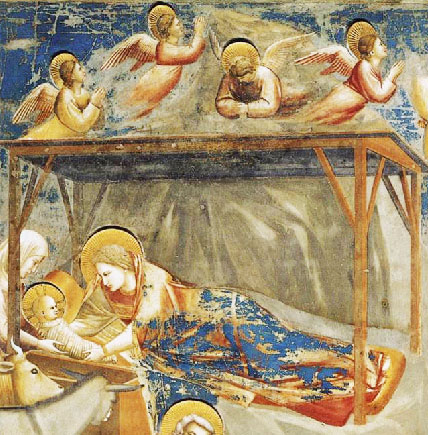 Once in a while, just for variety, they’d produce a painting of the grown-up Jesus instead. With halos and winged angels, of course.

Then along came the Renaissance

Along with the dawn of the Renaissance came a long-overdue tide change in people’s sense of self-empowerment. A self-employed merchant class began to emerge out of the stifling structure of a peasant-populated feudal system. In the days of the Dark Ages, people were told to “know their place,” which usually meant tilling the land, and to be afraid of the local priest’s message that they might end up in the afterlife even worse off than conditions in their present lives. 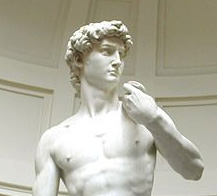 From the rubble of such intense human suppression emerged a new vision of hope, one which was based upon self-empowerment; one which was epitomized by Michelangelo’s David, which became the Renaissance icon of self-determination and personal empowerment.

The fact that David was naked caused quite a stir at the time, as did Boticelli’s The Birth of Venus (more popularly known by art museum tourists today as “Venus on the Half Shell”). 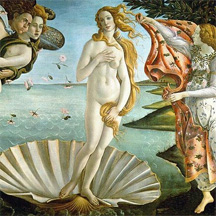 Commercially, the Renaissance began with a few venturesome merchants who broke out of the mold of subservience, expanded their activities to wider and wider areas, and became financially abundant. That spirit of independence grew over the centuries into what, today, has become an all-pervasive middle class of skilled, educated and self-determined people.

The dawn of prosperity began to appear in society, slowly dispelling the shadows of the Dark Ages. The most successful of the merchants of the day then had the resources to hire the best artists away from the Church. 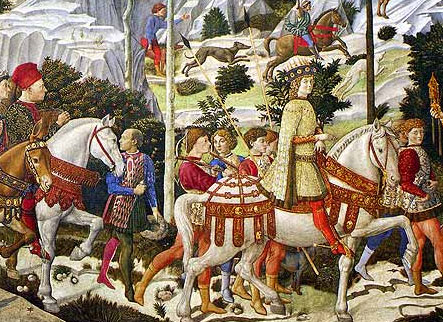 Creative paintings began to appear. Not just portraits, but paintings full of characters, and, without a halo in sight.

Usually, as if by coincidence, the face of the main character or hero in a painting would look a lot like the person, or persons, who were paying the artist.

Art and Altered States of Consciousness

Art began to move away from the purely religious and into the everyday world. The surreal began, slowly, to emerge. Even some paintings of people at work began to take on a surreal quality, as in “A Dream in the Appenine” (c.1864) by Samuel Palmer.

As with Gozzoli’s Journey of the Medici Family, a religious theme might still be used, but in a very new way, and, without a halo or wing in sight. 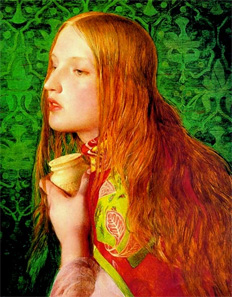 Notice the vivid colors, indicative of some conscious activation of his spirit body’s sense of vision.

The astral or spirit body perceives colors as being much more vivid than they are when seen through just the physical eyes.

In his youth, he shared a residence for a short time with Rossetti, who painted with similar vividness.

Rossetti’s “Vision of Fiammetta” almost looks like an inspiration for the colorfully vivid, psychedelic Flower Power era that would follow less than a century later.

In the early twentieth century, surrealism developed into its own branch of art.

The 1931 work, “The Persistence of Memory” by Salvador Dali, isn’t visionary in a the sense of higher consciousness, but it does use art to delve as deeply into subconscious imagery as did his contemporary, Jung, through psychology. 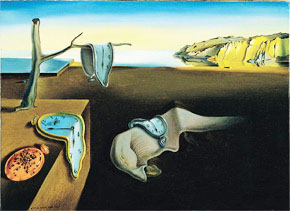 The mysterious depths of the unconscious mind were beginning to emerge and clamor for attention.

People began shifting their attention away from the everyday world in a search of the meaning of the other 90% of the human mind.

‘Stairway to Heaven’ is an example of the work of one of today’s leading visionary artists, Jim Warren. Notice how your gaze is drawn upwards towards higher things. 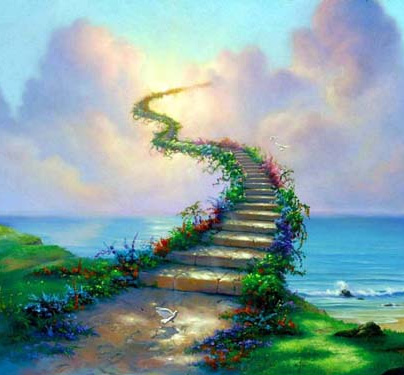 Notice the presence of water, with its power to revitalize the spirit. Notice, also, the presence of green (the resonant color of the heart chakra and the spirit body) and blue (the resonant color of the soul body). This is a very powerful combination of three uplifting influences. Jim Warren offers a variety of samples of his work such as poster-size art prints at his online gift shop.

The Future of Visionary Art

In these days of The Shift, people need art that provides more than a just a doorway into surreal realms of consciousness. They want to be inspired, uplifted and healed by visions of higher energies and higher consciousness.

The spirit realms are filled with brilliant light, vivid colors and visible energies that recharge the individual and fill the air with love and creative potential. Green and blue shades of colors are especially significant as they resonate with the frequencies of consciousness of the spirit and the soul.

As the inner vision of today’s artists shifts further into the spiritual realms, we can look forward to a new Renaissance in art; one which is visionary and spiritually inspiring.

*This article was written by Owen Waters, author of The Shift: The Revolution in Human Consciousness.