The universe is a giant doughnut! 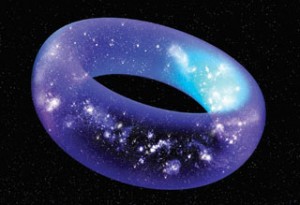 In physics, they call it a torus. Physicists speculate that the universe is torroidal-shaped. However, being a great fan of simplicity, I prefer the more ‘sugar-coated’ term, doughnut.

Moving beyond physics and into metaphysics, which is where all the fun stuff happens, the doughnut-shaped universe is really nothing more than a projection within the consciousness of its Creator. Beyond the outer walls of that doughnut-shaped universe there is no space. Beyond the universe, there is only the consciousness that created space and everything else that makes up our universe.

Space is no more than a concept in consciousness. It isn’t really “out there.” Everything made from consciousness is “in here,” within you. Space is a projection within consciousness, manufactured for a specific effect. It is one of the dimensions in which we operate in the adventure called life.

While everything is, in reality, just plain “here and now,” not really “out there and back then,” the manufacture of a map of projected consciousness created the different locations within this map of consciousness that we see as space.

Space is not infinite

The universe is made entirely of consciousness. The physical universe – the big doughnut – is held within infinite consciousness and is therefore, by definition, less than infinite.

The problem was, no-one could imagine infinite space. It just seemed so counter-intuitive. The idea that infinite space would really exist just didn’t sit right with anyone, but we all nodded our heads, thinking that grown-ups knew best.

In reality, physical space is finite, not infinite. It is a projection in consciousness contained within the Infinite Being which created it.

Time is not what it seems

Likewise, linear time is also finite. The term ‘linear time’ means clock-like time, and refers to the single timeline of past, present, future to which our brains are entrained.

The “time” before the universe was created was not time. It was pure consciousness – Infinite Being – from which time was created as yet another concept.

Both space and time are held in manifestation within the consciousness of Infinite Being. Nothing can exist outside of that awareness, for it is All-That-Is.

Everything, including the concepts of space and time, are created within its consciousness. Therefore physical space ends somewhere. It ends at the limit of the created universe. Beyond that perimeter at the edge of space lies Creator-consciousness.

Different points in time are merely different viewpoints in consciousness. Time appears to pass by in a linear fashion, but only because our brains are wired for, and entrained to, the illusion of the linear passage of time.

Most people on Earth have not considered that they can switch their focus to other locations in time and space at will. The energy required to instantly relocate a physical human body to another location in space-time might be prohibitive, but your mind can do it very easily. Remote viewing practitioners routinely visit other space-time locations under controlled conditions in order to gain information.

With brains that are entrained by the concept of linear time, we think of ourselves as being stuck in one location in space and in one position on our timeline. In reality, Infinite Being exists in the all-encompassing Here and Now and we are facets of Infinite Being. Therefore, all locations and all times can be reached just by transferring one’s focus to a different place in time and space.

As people develop their consciousness and their creativity in the dawning New Reality, these concepts will be explored more and more deeply.

Your purpose in life

Everyone comes into life with a purpose, a plan to explore certain attributes of themselves and the society of that era. However, beneath this immediate purpose lies an even deeper, long-term purpose.

The two conclusions that can be reached from these thoughts are:

1. All information that you need from anywhere in the universe is yours for the asking. If you want information from another location in time and space, just get into a good meditative state and pluck it right out of the ethers.

2. Express your full potential. No one else can do it for you, and no one can tell you that you should do it differently. It’s your life. You’re in charge of it. Inside of you is all potential. Become all that you already are in potential.